Film / Don't Look Under the Bed 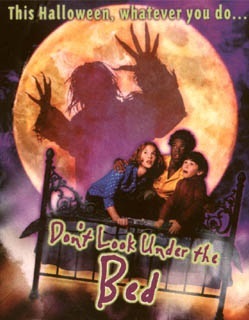 Don't Look Under the Bed is a Disney Channel movie about a girl named Frances Bacon McCausland, an intelligent and level-headed teenage girl who is starting high school one year early. Suddenly, strange things start happening in her quiet little hometown of Middleberg: Dogs on people's roofs, alarm clocks going off three hours early, eggs all over a teacher's car, sweet gelatin in the swimming pool, and B's spray-painted all over town, including the lockers of the school—except for Frances' locker, which has a B inside it. All these weird pranks seem to point to Frances, but none of it makes sense to her.
Advertisement:

The only person who can help her in this situation is a guy only she can see, Larry Houdini. Larry tells Frances that she's being framed by the Boogeyman, and he seems to know what's going on better than she does. Frances has a difficult time believing what Larry tells her, because she's always tried to look at the world like an adult, using logic and facts to explain everything, after her little brother Darwin almost died from leukemia a few years ago.

Over time, the Boogeyman's pranks become more insidious and incriminating, which further ruins Frances's life, so the unlikely pair decides to put their heads together to find this Boogeyman and get rid of him before he hurts someone.