Webcomic / Not So Distant 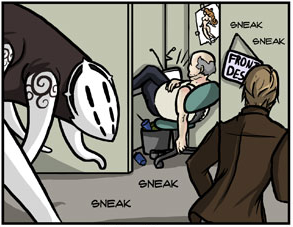 Sadachbia on the left, Roland on the right (or at least Roland's back)
Advertisement:

A webcomic started in 2008, featuring what may be one of the cutest betentacled beasties ever, an Albategna called Sadachbia (but named something entirely different).When a story starts with alien archaeologists unearthing the remains of an extinct humanity, you know something went down (just exactly WHAT hasn't been revealed yet).

The comic follows Sadachbia's early life (briefly), archaeological internship (interrupted by time travel), accidental time-trip to pre-armageddon Earth (where a human, Roland, was sort-of abducted), and currently, what happened when they pressed a button on what is now Sadachbia's time-ship.

, current location is unknown. An archive of the strips, plus a few other images, can be found here: https://www.dropbox.com/sh/75rpdiiaw5pwzfu/ntaaOWl5Yf