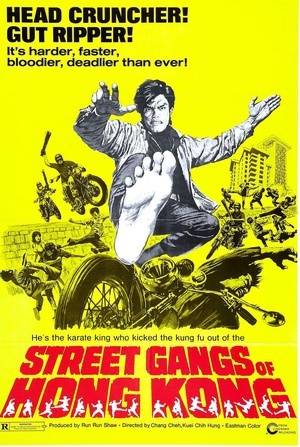 This shot was not in the movie, fyi. note  And for the record, he didn't crunch any heads or rip any guts, either
Advertisement:

The Delinquent, also known as Street Gangs of Hong Kong is a 1973 Shaw Brothers action-drama film directed by Chang Cheh and Kuei Chi-Hung (the latter having a larger role in directorial duties) and starring Wang Chung, Lily Li, Dean Shek and Fan Mei-Sheng.

Wang Chung, in one of the few times in his career where he gets a leading role, plays John Shum, a hooligan, school dropout and juvenile delinquent living with his father, working a variety of odd jobs (all which he hates) and juggling a relationship with his girlfriend Elaine. But after fighting off a large number of gangsters who tried stalking Elaine, John ends up catching the attention of local crime boss, Lam, who convinces John to join his gang.

It predictably goes downhill from there.

The Delinquent Contain Examples of: