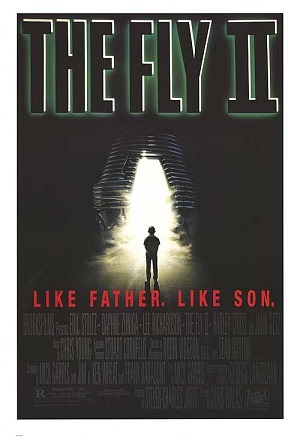 The Fly II is the 1989 sequel to David Cronenberg's remake The Fly.

After the events of the previous film, Veronica Quaife, the lover of the late mutated scientist Seth Brundle, is carrying his child. They've been put into the care of Bartok Industries, the Mega-Corp specializing in genetic research which initially financed Brundle's experiments. Its CEO Anton Bartok allows Veronica to die during delivery to obtain the baby. Naming the boy Martin, the child begins to develop at an accelerated rate. When Martin has physically become a young man, the mutations start to return and he becomes a threat to those around him.

In 2015, IDW Publishing released a five issue comicbook sequel to the film titled The Fly: Outbreak, which follows Martin as he accidentally causes more genetic mishaps.