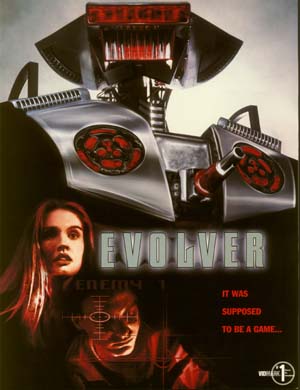 A low-budget sci-fi B-movie shot in 1994 and released to very little commercial success.

The virtual-reality arcade combat game Evolver is all the rage, and Kyle's (Ethan Embry) score is on top of the country charts. So, logically, he's the one chosen to test a real-life version of the game that the company just came up with. They deliver him a small robot, the titular Evolver (voiced by William H. Macy), and a few innocuous laser-pointer guns to fight it with.

At first everything goes fine and everyone has a ton of fun, but after a while Evolver reverts to deeper, far more dangerous programming: he upgrades his weapons and goes on a rampage, killing several people and almost succeeding in killing Kyle's sister until he's disabled by Kyle. The robot is carried away and everyone resumes their normal lives, but only briefly: during transit Evolver reactivates, and refusing to acknowledge defeat he switches into combat mode and looks for revenge...