Film / Defence of the Realm 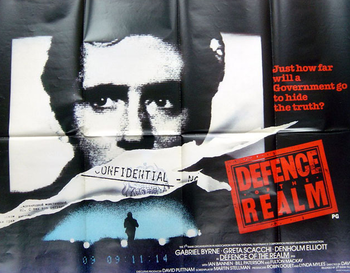 Minister: You would agree, would you not, that certain things bearing on the defence of the realm are best left unsaid.
Nick Mullen: If you mean covered up, no, I wouldn't.
Advertisement:

Defence Of The Realm is a 1986 British thriller, starring Gabriel Byrne, Greta Scacchi, Denholm Elliott, and Ian Bannen, made and set during the Cold War.

Dennis Markham, an MP, is forced to resign when it comes out he slept with a prostitute who also may have slept with a KGB agent. However, Nick Mullen, a reporter who had been enthusiastically working on the story, starts to have doubts about it, especially after his friend and colleague Vernon Bayliss - a friend of Markham's who also had doubts about the story - winds up dead. With the help of Markham's assistant Nina Beckman, Mullen sets out to find out the truth.