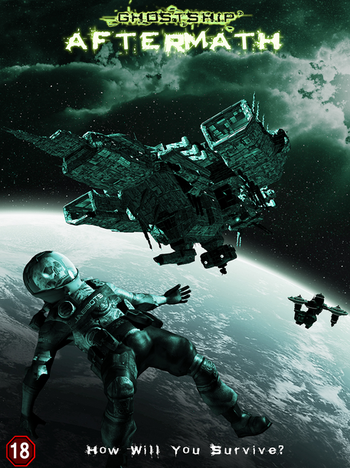 The games are heavily focused around exploration; after a short 5-10 minute introduction sequence, your character has the run of the entire ship, and a large part of success in the game involves learning the location of weapons and key resource stockpiles, as well as learning which areas of the ship are most heavily infested and should be avoided.

One key feature of all the games is that the plot is randomly generated on each new playthrough; each game has about 3 entirely different story paths, and character dialogue and behavior is randomly chosen from several different possibilities. Certain areas that could be accessed in one playthrough may be locked down in another playthrough because the character that you needed to open them for you is not alive in that playthrough.

The first game in the series, Ghostship Aftermath, was released in 2014. Originally conceived as a VR title, the game has a rather unconventional HUD seen from the inside of a spacesuit helmet, with pop-up windows and weapons being aimed with a free-floating crosshair. The game also has Survival Horror Resources Management Gameplay elements as ammo is somewhat limited and you only have 98 minutes of air in your spacesuit (though this can be refilled repeatedly in one particular location on the ship) and 60 minutes of battery time in your flashlight (which cannot be refilled). The game also deletes your save file whenever you die, forcing you to start a new playthrough.

The second game in the series, CDF Ghostship, released in 2015, was an Actionized Sequel, ditching the first game's spacesuit helmet HUD for a more conventional first person shooter HUD, including the ability to aim down sights with weapons. The game also does away with the limited oxygen and flashlight battery, and allows you to reload from your last autosave after dying, instead of forcing you to replay the entire game. Story-wise, the game is a Prequel taking place before the events of the first game, as a result there are more survivors still alive on the ship that you can interact with, and throughout the story you can cause events the consequences of which you saw in the first game.

The third game in the series, Ghostship Chronicles, was scheduled for a 2019 release before being pushed back, finally being released in November 2020. It features an entirely new engine with completely overhauled gameplay and presentation. The game takes place on a new ghost ship, the CDF Heckel & Thomas, which has also been infested by the same zombie-creating alien infestation that befell the Goliath. The player and 3 A.I.-controlled teammates comprise a CDF spec ops team sent to investigate the missing ship, and must explore the ship to discover what happened to it. It is somewhat more linear than the previous 2 games, with more maze-like levels and a fixed, non-random plot. The game is divided into 6 chapters, with multiple endings based on factors such as how many of your squad mates survive the journey.