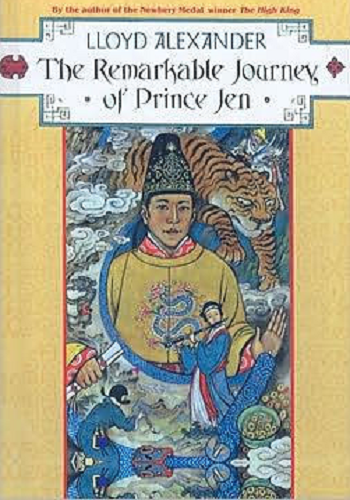 The Remarkable Journey of Prince Jen is a fantasy novel by Lloyd Alexander. While it has similar Coming of Age themes to his The Chronicles of Prydain, it's wrapped in Chinese mythos and philosophy.
Advertisement:

Prince Jen agrees to go on a journey to find the legendary court of T'ien-Kuo, seeking the wisdom there to govern properly. In exchange for the opportunity to obtain said wisdom, he carries six seemingly humble gifts: a saddle, a sword, a paint box, a bowl, a kite, and a flute. Setting out with his trusty servant Mafoo and loyal guardsman Li Kwang and his men, Jen discovers that the world is a far more harsh place than he thought, and that T'ien-Kuo might not be so easily reached.

Along the way, he travels and meets various characters, including the brave but clever flute-girl Voyaging Moon, the robber (with peculiar standards) Moxa, and the bloodthirsty bandit lord Natha Yellow Scarf. As he and the others around him gradually find out, there is far more to the gifts than meets the eye, and some of them have the power to reshape the world...