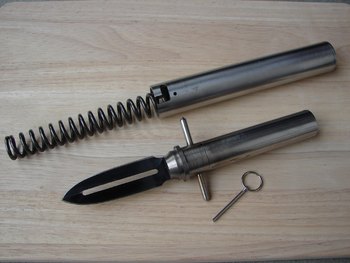 Most swords and bladed weapons suffer from the problem of breakage, and it takes regular maintenance to keep it in a good condition, either sharpening it or outright reforging it. Not only it is time-consuming: no matter how regularly you repair them, your blades will inevitably break. So why bother keeping the same blade?

Enter the detachable blade, a type of bladed weapon which can detach its blade from its hilt and swap for a new one. As long as you have a hilt and spare blades, there's no need to sharpen your blades. Simply toss the old blade away and put on a new one, and here it is — a brand new sword!

Some weapons with detachable blades take one step further by launching the blade towards an enemy. As not many people would expect a sword to shoot its blade, it serves as a great tool for a surprise attack, a bayonet, or a weapon for killing someone afar stealthily.

Compare Bifurcated Weapon, a weapon built by attaching with multiple weapons, in which they are naturally detachable for another reason. See also Detachment Combat, Feather Flechettes and Spike Shooter.