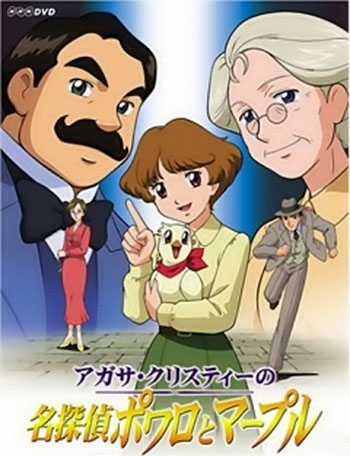 Agatha Christie's Great Detectives Poirot and Marple (アガサ·クリスティーの名探偵ポワロとマープル Agasa Kurisutī no Meitantei Powaro to Māpuru?) is an anime television series that adapted several Agatha Christie stories about Hercule Poirot and Miss Marple. Ran on NHK from 2004 to 2005, a total of 39 episodes.

A new character named Maybelle West, Miss Marple's great-niece, who becomes Poirot's junior assistant, is used to connect the two detectives. The series is a generally faithful adaptation of the original stories given the time constraints (typically one 25 minute episode for a short story, four episodes for a novel). Despite being a modern Japanese adaptation, the original (mainly English) locations and time period are retained. The most obvious story change is the addition of Maybelle West and her pet duck, Oliver. However, apart from her soliloquies, most of her lines are taken from the incidental dialogue of other characters in the original stories, so her presence does not materially alter the plot development.