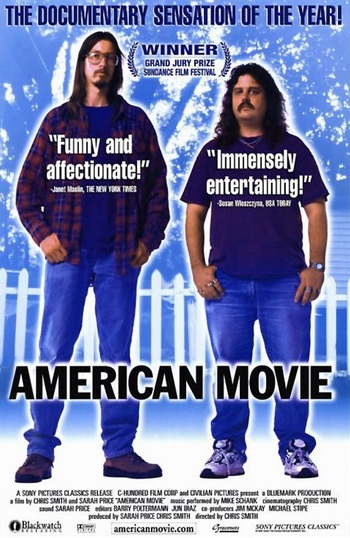 Life is kinda cool sometimes.
"I was called to the bathroom at the cemetery to take care of something. I walked in the bathroom, and in the middle toilet right there... somebody didn't shit in the toilet, somebody shat on the toilet. They shat on the wall, they shat on the floor. I had to clean it up, man, but before that, for about 10 to 15 seconds man, I just stared at somebody's shit, man. To be totally honest with you, man, it was a really, really profound moment. Cuz I was thinkin', "I'm 30 years old, and in about 10 seconds I gotta start cleaning up somebody's shit, man.""
— Mark Borchardt
Advertisement:

Part-time paperboy, army veteran, amateur filmmaker, slacker, and radio show scriptwriter Mark Borchardt has an idea for a Great American Movie: a potboiler drama about a misfit teen growing up in the suburbs of northwestern Milwaukee, titled simply Northwestern. Unfortunately, his own lack of directing experience stymies the project, and he falls back on completing his half-finished black-and-white horror short "Coven" to gain experience and, more importantly, capital. With the help of his friends and family, including his rich, decrepit Uncle Bill, to provide most of the funding, his brain-fried ex-stoner-turned-scratchoff-lottery-ticket-addict best friend Mike to provide the music, and his own mother to play an evil minion, Mark sets out to finish "Coven" at any cost, man.

Not to be confused with any movie with an American Title, of which it is but one example.