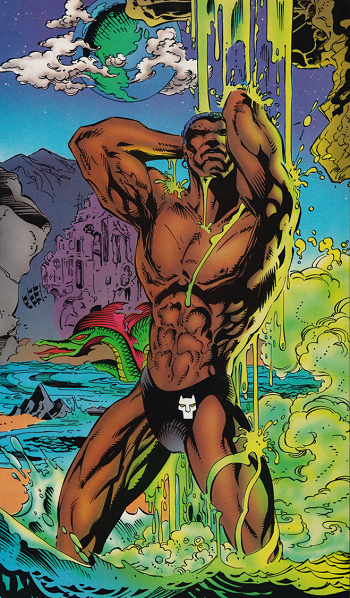 "You know, it's really not fair. You've been dead for six months and you still look better than me."
— Frohike to Mulder, The X-Files ("Three Words")
Advertisement:

The Spear Counterpart of Ms. Fanservice, Mr. Fanservice provides similar eye candy for viewers who are into men. It can be an effective way to bring in female viewers, even in a series directed towards males.

In order for a guy to qualify as Mr. Fanservice, just being attractive isn't enough. He needs to be shown in scenes intended as sexual fanservice. He can have anything between muscular limbs, broad shoulders and/or sculpted abs (between six-packs and eight-packs). The muscles can be either lean or chiseled; as long as you can see them, they count. He may also have long hair though it's not required. Most of the time, he has medium length hair, a swimmer's build, a smooth chiseled chest, washboard abs and no shirt on. However, if he's wearing a shirt, it's usually sleeveless or left totally unbuttoned.

He tends to be subjected to at least one Shirtless Scene, or he can take it a step further by deciding to forgo a shirt all the time—though a Mr. Fanservice can also have zero shirtless scenes. In the Beach Episode his choice of swimwear is likely to be a speedo (AKA swim briefs). Just like his aforementioned counterpart, he can wear tight clothing, which shows off his body without baring skin. He can pull off a male version of Bare Your Midriff. He can wear anything (or nothing, that works too), as long as these clothes accentuate or reveal his muscles. In an action-driven story, glimpses of his physical assets may also be accomplished via clothing damage. If he wears some sort of skirt-like garment the female fans will be prone to ask if he wears anything underneath it. He can also gender invert the Reluctant Fanservice Girl, Shameless Fanservice Girl, and Innocent Fanservice Girl tropes.

An especially easy way to show off his figure would be through the Workout Fanservice, where he flexes his muscles via exercising. Hot Men at Work is when Mr. Fanservice is, well, at work, but distinctly lacking a shirt, regardless of health and safety issues. Bonus points if he's The Charmer. If he wears small underwear, you have Briefs Boasting.

It should be noted that the trope is not necessarily restricted to Hunk type characters either. Bishōnen and pretty boys can easily qualify as well, and are often intended as fanservice too (particularly in manga and anime, where they are rather common and video games, where they are not as common with some notable exceptions). A rarer type of the pretty boy subseries is the Biseinen - a Hunk but with the pretty face of a Bishonen. Biseinen are often unemotional but can still appear in comedic situations which can overlap with the gender-inverted Reluctant Fanservice Girl.

Either way, the camera seems to have the hots for him, and the viewing audience is expected to feel the same way. While the way a Mr. Fanservice is presented often comes across as sexist, there is nothing inherently wrong with the trope itself; the real trick is to give him a genuine, fleshed-out personality beyond being eye candy, instead of having him exist solely as a Flat Character. (Besides, being "flat" usually doesn't fit this type of character.) If the Mr. Fanservice has a particularly cruel personality (usually a villain), he also qualifies for Fan Disservice.

Because Most Writers Are Male who believe the majority of their audiences are also male, Mr. Fanservice is subjected to multiple Double Standard tropes in his favor compared to his female counterpart; he isn't subjected to as much scrutiny from the Moral Guardians who believe that All Men Are Perverts but not that All Women Are Lustful (neither generalization is true), and he tends to avoid falling victim to Best Known for the Fanservice. However, in recent years more people have at least become aware that a sexually appealing woman is no more or less problematic than a sexually appealing man, in fiction.

See also Eating the Eye Candy, Cast Full of Pretty Boys, and Bishōnen Jump Syndrome which can sometimes be the reason for its existence.