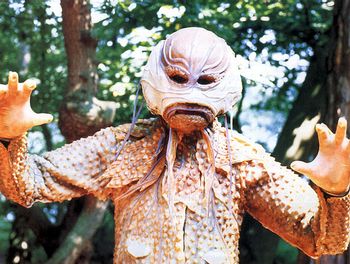 Welcome to E-Space! We hope you enjoy your stay...
Login: A little patience goes a long way.
The Doctor: Yes. Too much patience goes absolutely nowhere.
Advertisement:

The one with fish people. And the other one where the Doctor flips his lid in anger.

Written by Andrew Smith. This four-episode serial first aired from October 25 to November 15, 1980.

The TARDIS is on its way to Gallifrey to return Romana home, a task the Doctor has been putting off (and Romana has been letting him) for over a season, when it falls into a Negative Space Wedgie. The result is apparently only a momentary disturbance, but when they arrive at their destination, it isn't Gallifrey. They're in the right place, and the right time, but — they eventually discover — the wrong universe. (For ease of discussion, they subsequently dub the two universes "Normal Space" and "Exo-Space", or "N-Space" and "E-Space" for short.)

Meanwhile, the inhabitants of the planet that isn't Gallifrey have problems of their own. Years ago, a starliner from the planet Terradon made a crash landing on the planet, where they were attacked by the local lifeforms. The survivors of the attack set about trying to repair the starliner and return to Terradon, a task at which their descendents are still working. And now the season of Mistfall is approaching, when all take shelter within the hull of the starliner to avoid the mysterious dangers lurking in the fog. But there are dangerous mysteries inside the starliner as well.

At the end of the story, Adric, a young boy from the starliner, stows away in the TARDIS.