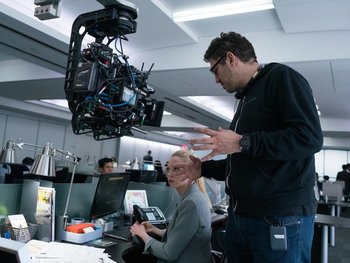 A showrunner, running the show.note In this case, Mr. Robot creator Sam Esmail.
In short, the unofficial title for an executive producer who oversees the creative content of the show, not just the financial aspects. To expand a bit, the showrunner is the person who gives the show its overall tone and direction, making all the final creative decisions about what the identity of the series is. Theoretically, the buck stops here. But in practice, the showrunner is beholden to people higher-up in the studio chain of command, and can be overruled by any combination of the studio producing the shownote this is the role of the "executive in charge of production", who despite the showrunner-sounding title is actually the standard name for the studio liaison, the network or service on which the show will be broadcast, and even the advertisers and sponsors.
Advertisement:

The initial showrunner is usually the same person credited as the creator or, if it's a new entry in a Long Runner franchise, series developer. If the showrunner is a big enough name that they have their own associated production company, then that will appear as a Vanity Plate in the Closing Credits, usually right before the studio's own credit.

For any number of reasons, from the studio/network forcibly removing them from the project, being overwhelmed by the stress of production, or just wanting to take a break or pursue other ideas, the original showrunner may leave and be replaced by a new one. The new showrunner is usually advancing from the role of head writer, and this changing of the guard can often be a Jump the Shark or Growing the Beard moment if their vision for the show differs from that of their predecessor. Creators or showrunners who step down into smaller roles on the production (or even leave the production all together) may continue to be credited as an executive producer for the remainder of the show's run regardless, although sometimes they will be "demoted" to consulting producer or creative consultant. Initial creator-showrunners have occasionally been known to come Back for the Finale, or even (given enough lead time) the entire final season.

Not to be confused with someone like a go-fer, who helps keep the show running by getting miscellaneous items like coffee or snacks for the higher ranking staff. Also see In Case You Forgot Who Wrote It for plenty of examples where the person who most visibly has their name attached to the project, is not the showrunner.

Showrunnners Who Took Over Existing Shows

Shows Where the First Showrunner Was Not the Creator