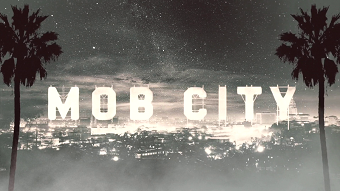 Don't expect a lot of glitz and glamor in this drama.
Hecky Nash: This city... so damn beautiful. But only from a distance. Up close, it's all gutter.
Advertisement:

Mob City is a period drama that premiered on TNT on December 4, 2013, which stars Jon Bernthal and Milo Ventimiglia with the show mainly created and produced by Frank Darabont. It was first reported to be broadcasted under the title ''L.A. Noir'', before it was changed to ''Lost Angels'' and then to the current title to avoid trouble with the viewers on confusing it with the videogame L.A. Noire. A six-episode first season was broadcast over a compressed three week period in 2013, but the show was not picked up for a second run due to poor ratings.

Set in 1947 (with occasional flashbacks to the 1920s), the drama tells the story of how the Los Angeles Police Department and the mob are waging war on each other in order to claim dominance over Los Angeles after the end of World War II. The LAPD is about to come under the leadership of William Parker, who is determined to get rid of the mob from LA's streets. One of the detectives involved in the war against organized crime is Detective Joe Teague, an ex-Marine who fought in the Pacific against the Imperial Japanese Army before he retired and joined the force.

At the helm of the mob is Mickey Cohen, who is determined to make LA his power base in the western part of America. And along the way, Joe has some secrets that he needs to keep from his superiors in the LAPD and from various mobsters if he wants to stay alive.