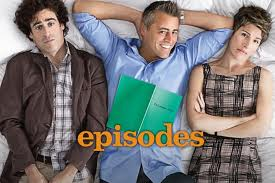 Sean and Beverly Lincoln (Mangan and Greig) star as a husband and wife writing team from London who have just won two more BAFTAs for their critically acclaimed show Lyman's Boys. At the ceremony, they meet the American television executive Merc Lapidus, who claims to love their show, and offers them the opportunity to produce an American remake. Without any second thoughts, the couple packs their bags and heads to LA. Big mistake.

Upon arrival, they realize everything is not like they imagined. Not only does it turn out that Merc has never seen Lyman's Boys, but he also wants to use the American remake as a comeback vehicle for Matt LeBlanc, and is ready to Retool the show to meet any of Matt's eccentric demands.

And so, the couple of writers loses all creative control over the remake of their own brainchild to an executive who never saw their show, and an actor with the biggest ego they ever faced.