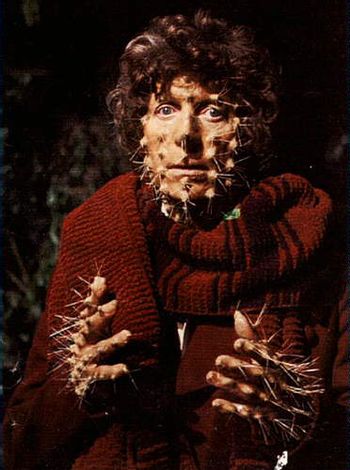 Just... just look at the panic in Tom's eyes, there...
"First things first, but not necessarily in that order."
—The Doctor
Advertisement:

The one with an evil cactus and trypophobia. Plus the return of a former companion, but not in the way you'd expect.

On the planet Tigella, life revolves around the Dodecahedron, a mysterious alien artifact which powers Tigellan civilization. Some Tigellans worship it as a gift from their god, while others consider it just an object to be scientifically studied. With tensions between the two groups running high, the Tigellan leader sends a message to the Doctor, who has visited Tigella once before, inviting him to come and arbitrate between them.

The message is intercepted by Meglos, the last survivor of the neighbouring planet Zolfa-Thura; the scientifically-advanced Zolfa-Thurans created the Dodecahedron shortly before wiping themselves out in a massive war. Meglos uses his technology to trap the TARDIS in a time loop and then to disguise himself as a double of the Doctor, and travels to Tigella himself. He manages to steal the Dodecahedron and is about to leave when the real Doctor, having escaped the time loop, arrives and is promptly accused of the theft. There is much confusion, and although it becomes clear that there are two Doctors roaming about, the fake Doctor manages to get away with the Dodecahedron. Meglos returns to Zolfa-Thura, where he plans to use the Dodecahedron to power a superweapon capable of destroying entire planets.

The Doctor and Romana follow, and the Doctor attempts to turn his trick against him by telling Meglos's hired henchmen that he is Meglos and that any other Doctor they see about the place is the real Doctor and should be locked up. This works long enough for him to mess around with Meglos's superweapon, and when it is fired it explodes, taking Meglos, his henchmen, and the planet of Zolfa-Thura with it.

Oh, and the Dodecahedron, leaving Tigellans of all ideological persuasions to work together to rebuild their civilization using some other power source.

The Doctor and Romana are all set to continue on to more adventures, at least until Romana suddenly receives a message from Gallifrey... demanding her return.