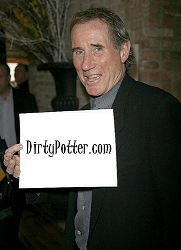 Dirty Potter is what results when the Harry Potter audiobooks, as narrated by Jim Dale, meet with Manipulative Editing. In the words of the site, "[Dirty Potter] is a trilogy of audio shorts that were made in Adobe Audition, through creative use of word splicing and sound editing of all seven Harry Potter audiobooks. The characters have been re-imagined as overly lustful and sex-crazed; frequently engaging in lewd activities and using vulgar language. Each audio short is narrated by British actor Jim Dale, who also has been incorporated as a totally new character in the context of the parody." Though the creator remained anonymous for many years, responsibility for the madness has since been claimed by one Marley Feck

The series currently spans four episodes: "Dirty Potter and the Snape Murders Dumbledore"; "Dirty Potter and the Deathly Farts", "Dirty Potter and the Fabulous Gay Farty Pee and Poo Party", and the multi-part installment, "Fuckbeaknote a stand-in for the Harry Potter character Buckbeak & Friends". The team has also created "Dirty Barack", a splicing of Barack Obama 's "The Audacity of Hope", "Dirty Peter Pan and the Long Black Penis of Evil", and "Dirty the Pooh and the Hundred Acre Shitpile".

Oh, and it has nothing to do with a Harry Potter / Dirty Harry crossover.