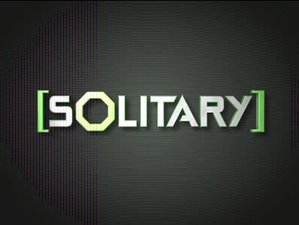 Welcome to Hell
"Hello. My name is VAL. Welcome to a unique social experiment, designed to push nine humans to their absolute physical, mental, and emotional breaking points. Locked in isolation pods and cut off from all contact, they are not competing against each other, but against themselves. In the end, only one will remain. He, or she, will leave Solitary with $50,000. My role is to observe what makes them strong, and what makes them weak, to push, to pry, and discover who will crack next. Welcome to Solitary."
—VAL, Season 2 opening
Advertisement:

Solitary is a Reality Show which aired on the Fox Reality Channel. It features nine contestants locked in isolation pods, and cut off from all contact with each other and the outside world. Their only companion is VAL, a Master Computer who serves as the host of the show. While in isolation, they face a series of tests, treatments, and general torture designed to push them to physical, mental, and emotional extremes. When a contestant can't take it anymore, they push a red button, saying they want to quit the game. Eventually, all the players save one quit. The one survivor wins $50,000.

As said earlier, the main twist of this series is that, compared to other Reality Shows, Solitary focuses less on interactions between contestants and more on the sheer isolation. With that in mind, none of them know how the other contestants are doing during challenges/treatments. So long as you're not the first player to quit, you move on, but with no idea on whether or not someone had quit, some people will spend literally hours suffering even when everybody else has quit. As such, none of the games are about competing with others, just your own physical/mental/spiritual limits.

There will be spoilers ahead. Read at your own risk.

This show has examples of the following: