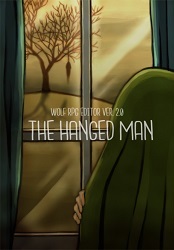 The Hanged Man is the fourth (and, chronologically, last) installment of Uri's Strange Men Series.

William Morton is in a snowy town. After getting into some trouble, he meets up and gets taken in by David Hoover, which his original goal was. However, Will feels uncomfortable in David's presence and sneaks out of the house in the dead of night, choosing to stay in a motel instead.

The next day, he wanders around town and finds an old, abandoned building deep in the woods. Will enters it and has a look around, then his pet rat Pop runs away from him. He comes across Keith Baring, who tells him that he has to leave. Will refuses to leave until he finds Pop, so he begins to search the building, meeting and befriending a homeless guy, Edward, along the way. Unfortunately, a killer whom Keith is chasing is also inside said building...

The translated game can be found here

The Hanged Man contains examples of: