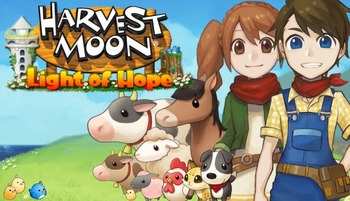 Harvest Moon: Light of Hope is the fourth Harvest Moon title developed by Natsume. It was released on Steam in November 2017 and was ported to the PlayStation 4 and Nintendo Switch in May 2018.

The story starts when the protagonist's boat is caught in a storm. They end up on Beacon Island and are saved by a mysterious woman. However, only three people still reside on Beacon Island. Everyone else left after the famous lighthouse's light suddenly died a few years. The protagonist volunteers to fix the lighthouse and bring life to the desolate island, all the while fixing up a nearby farm.

The physical version was released as Harvest Moon: Light of Hope Special Edition. It includes four DLCs and a new character: a Gem Sprite named Soleil who can help you harvest crops, collect resources, and be married. Light of Hope Special Edition is also the first title in either the Harvest Moon or Story of Seasons series' to feature co-op multiplayer.