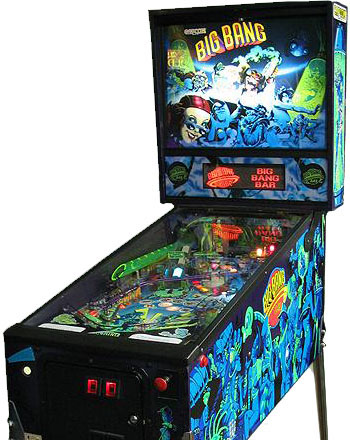 "On the night of July 2nd, 1947 a loud crash was heard near Roswell, New Mexico. Remains of an alien spacecraft were recovered, although this was officially denied by the United States Government. Was this craft the advance scout of an impending alien invasion of the Earth? Or was it simply an accident by a group of joyriders after having one too many at the... BIG BANG BAR?"
— Attract Mode narration
Advertisement:

Welcome to the Big Bang Bar, the rowdiest late-night alien dive in the cosmos! Check your carapice at the door, slither up to a table, and the waitress will be with you shortly. Get your groove on with the techno-thumpin' tunes and strobing neon lights, and feast your eyes on the gorgeous gyrations of the Tube Dancer at center stage. Or you can Tour the Bar, play some Cosmic Dartz, then try to score a drink award with Ray's Ball Busters. For more excitement, stuff the Loopy Martians until they get Looped In Space, fire up the Babescanner and the Lunapalooza, or just wait for a Multibrawl Multiball to break out. Complete all fourteen tasks for a shot at the Big Bang, and see how much you can really score.

Big Bang Bar was originally created at Capcom Pinball by Rob Morrison and illustrated by Stan Fukuoka. Despite positive reactions from early field tests and the 1996 Pinball Expo, Capcom closed their pinball division shortly afterwards, leaving only fourteen prototypes produced and relegating the game to the footnotes of history...

...until 2004, when Gene Cunningham of Illinois Pinball Inc. announced that he was buying the rights from Capcom to produce a "remake". Despite substantial setbacks and cost overruns, the game was eventually delivered by "Pinball Manufacturing Inc." in 2006, with a total production run of 191 tables. While Big Bang Bar is still hard to find, it shows up regularly at expos and tournaments, attracting new fans with each appearance.