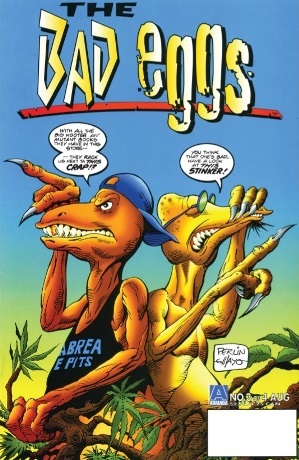 The Bad Eggs is a comic book published in 1996 by Valiant Classic and written by Bob Layton, with Don Perlin, Andrew Covalt, and Gonzalo Mayo providing the illustrations.

Billions of years ago, after the world was created, a lone vertebate creature evolved and managed to drag itself onto land. However, the creature didn't like what it saw, and promptly swam back into the ocean.

Millions of more years passed, and the animals on earth evolved into sentient, talking dinosaurs who now roam the lands. Two of these beasts, a pair of lewd raptor brothers named Ript and Claude, spend their time in the Cretaceous era trying to survive various epidemics while also getting involved in absurb hijinks. Said hijinks include trying to stop a war that began because of a drought, being visited by aliens, turning into a herbivore after a near-death experience, and determining whether or not a Brontosaurus has a small penis.

Yeah. It's that kind of comic.

The Bad Eggs provides examples of: