Film / Seeding of a Ghost 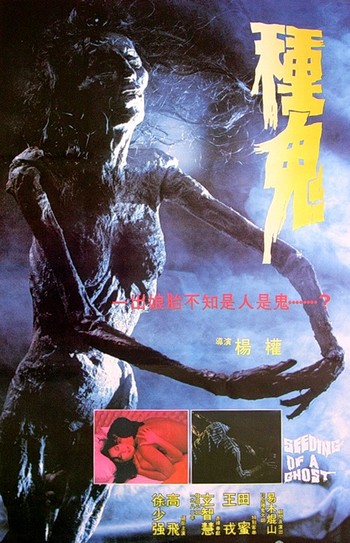 Seeding of a Ghost is a 1983 horror film made by Shaw Brothers, starring ex-Venoms actor Philip Kwok and Norman Chu.

Chow Tung (Philip) is a taxi driver a rather boring life, safe for having a beautiful wife, Irene, back at home. However, Irene is an unfaithful wife who had an affair with local playboy Anthony (Norman), and when Chow tries confronting Anthony over this affair, he ends up being brutally beaten up by Anthony, crippled, and publicly humiliated, while Anthony happily rubs into Chow's face after injuring him, happily gloating how he's entitled to have any woman he wants.

Remembering there's a witch doctor who owes him a favor some time ago, Chow decide to pay him a visit, hoping for the doctor to inflict a Curse on Anthony and his cronies for screwing up his life. The witch doctor's only available spell, unfortunately, turns out to be an aborted fetus from an unborn child, whose thirst for vengeance turned it into a powerful, netherworld demon. With Chow willing to do literally anything to get back at Anthony, he managed to convince the doctor to have the demon unleashed.

Seeding of a Ghost contains examples of: