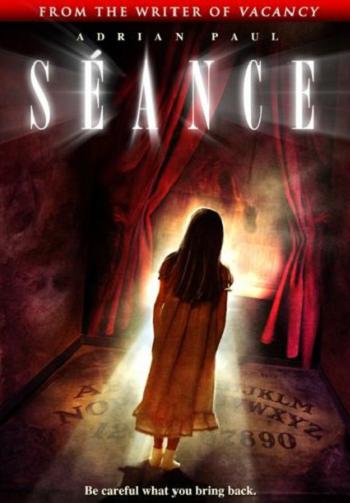 Five college kids, one ghostly killer... you do the math.

Séance is a 2006 supernatural horror film, with some elements of the slasher genre.

For as long as most people can remember, the Chelsea Building (former apartment, now a university dormitory) has been plagued by the spirit of a little girl, nicknamed "Chelsea" after the building. Few know the girl, actually named Cara Furia, lived in the building during the sixties, dying in 1965 when she fell down an elevator shaft when her mother was out, and while her older sister was asleep. Ever since then, Cara has stuck around for reasons unbeknownst to anyone but herself.

By 2006, a girl named Lauren and her friends Alison and Melina have moved into Cara's old place. While Cara's antics (which consist primarily of making patterns on the bathroom floor) intrigue and frighten Lauren, her roommates are quick to dismiss them. When Thanksgiving weekend arrives, Lauren and her gal pals opt to stay on campus instead of going home, their only companions being middle-aged security guard Syd, Alison's boyfriend Diego (who is stuck pet sitting his roomie's parrot) and Grant, the reclusive boy who lives down the hall.

After a bit of partying, and learning about Cara from Grant, Lauren and her roommates decide to hold a séance, led by Diego, a self-proclaimed expert on the subject (he wrote a term paper on spirits... it got a C-). When attempts to communicate with Cara prove futile, the group switch things up and try reaching out to James Spence (Adrian Paul), a deceased maintenance man who Grant's room used to belong to. Calling out to James actually works, and the group end up successfully summoning him. Unfortunately for them, it turns out James was a serial killer who was executed via the electric chair in 1973 when he was connected to the deaths of several children.

He's glad to be back in his old home, with a boatload of fun powers at his disposal and... well, see the above tagline.