Film / Hell of the Living Dead 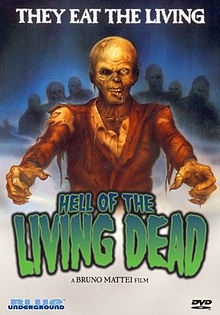 Hell of the Living Dead, also known as Night of the Zombies or Zombie Creeping Flesh, is a 1980 zombie exploitation film by Bruno Mattei and Claudio Fragasso. In Papua New Guinea, "Hope Centers" work to help feed impoverished nations, or so they claim. Unfortunately, one of its projects, Operation Sweet Death, has a spill and causes the facility and the country to be overrun by zombies.

The film is largely known for its plagiarism of Dawn of the Dead, with characters wearing similar uniforms to the heroes of Romero's film, as well as using some of its music, although much of Hell of the Living Dead's soundtrack also came from the Alien rip-off Contamination, which was scored by Goblin.