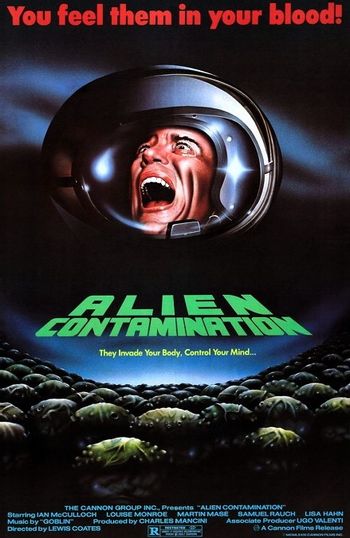 Contamination (alternate titles include: Alien Contamination, Toxic Spawn, and Alien Arrives on Earth) is a 1980 Sci-Fi Horror film by Luigi Cozzi. As a large cargo ship, the Caribbean Lady, drifts into New York City, the crew is nowhere in sight. Upon further investigation, their remains are found, appearing as if they exploded.

Inside the cargo hold, an unusual cargo is found: green, pulsating eggs, unlike anything seen before. Disturbing them causes them to rupture, and reveals the cause of the crew's deaths as the police officers' chests explode!

Colonel Stella Holmes is assigned to investigate the strange case. Soon it becomes apparent that these eggs are not from Earth, and with the help of former astronaut Ian Hubbard, they track the eggs to South America, where their true source is revealed…

Contamination was among the earliest of Alien ripoffs, taking the chestburster idea and running with it.