Film / The Hawks and the Sparrows 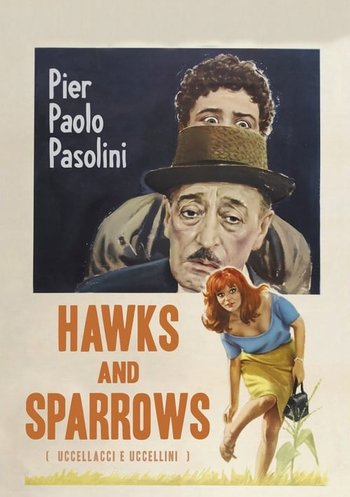 The Hawks and the Sparrows (Uccellacci e uccellini, "Birds of prey and little birds") is a 1966 film by Pier Paolo Pasolini.

Toto and Ninetto, father and son, are taking a long and somewhat aimless walk through the outskirts of and countryside around Rome. While they are strolling along, they encounter a talking crow. The crow, who is not just talking but extremely talkative, tells them a story.

The Show Within a Show story that the crow tells is set some 750 years earlier, around the beginning of the 13th century. None other than St. Francis of Assisi charges two friars, Ciccilo and Ninetto (played by the same actors as Toto and Ninetto) with spreading the word of God to the hawks and the sparrows. The true believer Ciccilo drags his somewhat reluctant assistant along, and eventually, they achieve surprising results. This section of the film takes up a large chunk of the running time.

Back in the present day, Toto, Ninetto, and the Crow walk on, seeing more strange sights, like a farmhouse whose occupants are surprisingly well armed, an oddball troupe of actors, and a cheerful prostitute.