Film / Hands over the City 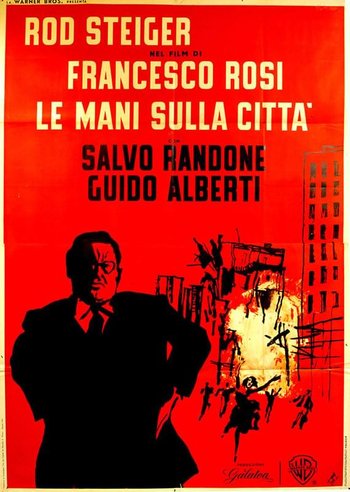 Hands over the City (Le mani sulla città) is a 1963 film from Italy directed by Francesco Rosi.

The film is set in Naples. Edoardo Nottola (Rod Steiger) is a corrupt city councilman who also happens to own a large construction business. That works out pretty well, as Nottola gets the city council to sell him some land dirt-cheap and authorize him to develop it into a bunch of apartment complexes.

Unfortunately for Nottola his bumbling idiot son botches the construction, causing the partial collapse of another tenement, killing two and crippling a child. The city council swings into coverup mode, while Nottola in particular schemes to tear down the old existing tenements, send the poor people packing, and build fancier ones. There's a fly in the ointment, however, in the person of De Vita, a Communist councilman who demands an investigation and accountability.