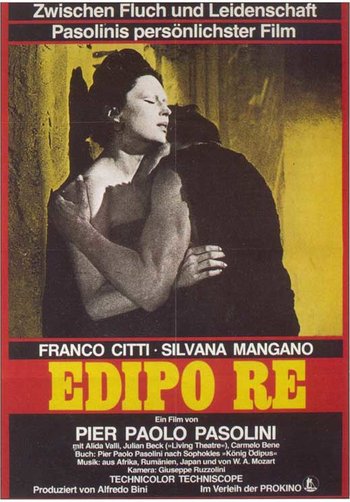 Oedipus Rex is a 1967 film from Italy directed by Pier Paolo Pasolini.

It is—no prizes for guessing—a telling of the myth of Oedipus, most famously dramatized in the Ancient Greek play Oedipus Rex aka Oedipus the King. The film is a straightforward depiction of the myth, except for the fact that the opening scene is set in Fascist Italy of the 1920s. But we still have Laius (in the modern setting an officer in the army), who is jealous of his wife Jocasta's attention to their baby son, even before he becomes aware of a prophecy that the infant will grow into a man who will kill him and then have sex with Jocasta.

At this point the film's setting changes to the ancient world, as a servant abandons the baby on a mountain to die, per Laius's orders. But the baby is rescued by a passing shepherd, and given to the childless King Polybus of Corinth and Queen Merope (Alida Valli, in a small part) of Thebes. Oedipus grows to adulthood as the beloved son of the king and queen, but he hears a disturbing rumor that he is not their natural son but in fact a foundling. He goes to the Oracle of Delphi to ask about this, only to hear a far more disturbing prophecy: that he is doomed to kill his father and have sex with his mother. Distraught at this, Oedipus leaves Corinth immediately. After some random wandering, he meets King Laius of Thebes at a crossroads...

Silvia Mangano plays Jocasta. Oedipus was played by Franco Citti, who had a small role as a Sicilian Mafia foot soldier in The Godfather (he's one of Michael's bodyguards).