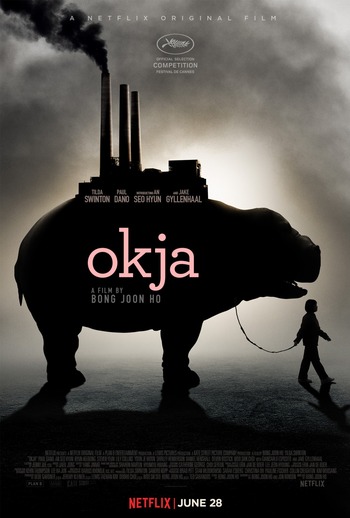 "The world is running out of food, and we're not talking about it. We needed a miracle...and then we got one."
"Our superpigs will not only be big and beautiful, they will also leave a minimal footprint on the environment, consume less feed and produce less excretions. And most importantly...they need to taste fucking good."
— Lucy Mirando
Advertisement:

Compared to Snowpiercer, Bong's previous film and his first to primarily use the English language, Okja has a more balanced blend of English and Korean, which can be attributed to this film focusing on its Korean protagonist.

In 2007, "environmentalist" Lucy Mirando (Swinton) assumes her twin sister's role as CEO of the multinational conglomerate Mirando Corporation and launches a marketing campaign in which the company sends 26 giant genetically modified animals that they have bred and dubbed "superpigs" to farmers around the world, with one to be crowned as the best superpig in a decade's time.

After Okja is paid a visit by Mirando representatives, led by spokesperson and eccentric TV personality Johnny Wilcox (Gyllenhaal), it is determined that she is the best superpig and will be transported to New York to be unveiled to the world. Fantastic news, right?

As it turns out, Mija is devastated at the prospect of being separated from Okja, and sets out on a journey by herself against her grandfather's wishes to rescue Okja and bring her home. However, Mija's quest gets complicated when separate groups of capitalists, demonstrators and consumers become ensnared in the buzz surrounding Okja, and seemingly everyone she meets has their own plans for the fate of the superpig — some darker than others.