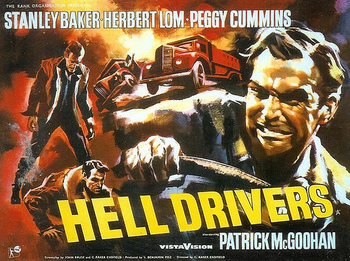 Hell Drivers is a 1957 British Film Noir directed by Cy Endfield. Probably more notable for the amount of Retroactive Recognition it generates than anything else, it stars Stanley Baker, William Hartnell, Peggy Cummins, Herbert Lom, and Patrick McGoohan, with significant appearances from Sid James, and Sean Connery.

Cartley (Hartnell) is the manager of a contractor named Hawletts, which employs many drivers to transport at least 18 loads of gravel across 20 miles each working day. A man, who is said to be called "Joe Yately" but goes by "Tom" (Baker), has just been released from prison and is determined to leave his criminal past behind him. He joins Hawletts as the new thirteenth driver and Cartley is impressed with his first-day work. One worker that isn't is the driver of truck #1, Red (McGoohan), a wild Irishman who boasts that he can make the most deliveries out of the rest of the team, offering to give anyone that beats him his expensive cigarette case. Tom is ready to take up the challenge, exciting the smug Red and amusing the rest of the team.

Tom soon becomes successful with his deliveries and works up to be one of the best in the team, making Red feel threatened. Despite his improvements, Tom still seems to be the outcast of the rest of the group, who are suspicious of his history. The only person that Tom gets along with is an Italian worker named Gino (Lom), who is dating the Hawletts' secretary Lucy (Cummins), who herself is having second thoughts. When Red warns Tom to back away from even considering to attempt his cigarette case challenge, Gino jumps in to defend him, but he and Tom soon discover a Hawletts' conspiracy when Tom's pay is notably smaller than it should be...

Also, if you're expecting to see Clark Gable and Wallace Beery in this movie, you're thinking of the 1931 movie Hell Divers.