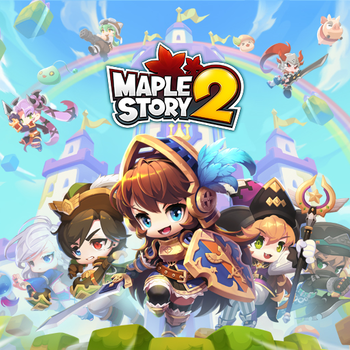 MapleStory 2 is a free-to-play Action MMORPG created by Nexon. As the title suggests, it is the successor to the hit Korean MMORPG MapleStory. It was released in Korea in 2015 and ran globally for only over a year and a half on October 10th, 2018 to May 27th, 2020 due to a lack of overseas interest and support. The original Korean version of the game remains in service, however.
Advertisement:

In ancient times, two goddesses, one of light and one of dark, created many worlds, including the Maple World. When the goddess of light wished to protect the Maple World from the darkness, her sister attacked, and after a brutal war, was defeated, but not before poisoning the land with her power. The remainder of the light goddess's power became Empress Ereve, who enlisted seven heroes to contain and eradicate the darkness. After a ritual to purify the darkness went awry, creating the Land of Darkness, two of Ereve's heroes set forth to complete the ritual, sacrifcing themselves in the process. A peace finally dawned upon the Maple World, but the advent of the Black Mage threatens the realm once again, and only a true hero may rise to stop him.

Unlike its predecessor, whose defining trait was being a 2D platformer in addition to being an Action RPG, MapleStory 2 adopts an isometric 3D style utilizing a cuboid design not unlike that of games such as Minecraft and Dragon Quest Builders. Like the previous game, players take up the role of one of many classes and fulfill requests for people while progressing an overarching plot, but the overbearing complications and archaic mechanics surrounding the overall gameplay have been adapted and streamlined to fit a modern formula. Along the way, players can also take the time to settle down with their own custom house, take up gardening and mining for resources to craft items and gear, design clothes for you and your friends, or just play some music on the side. Whereas the original game was largely gameplay-focused, MapleStory 2 is more about the player experience, evident in its bursting character and depth of customization. Of course, that doesn't mean you aren't going to be heading down to the deepest pits of Hell and slaying a Balrog or two.