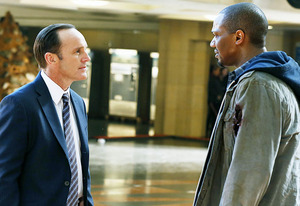 The pilot episode of Agents of S.H.I.E.L.D.

After the events of The Avengers, S.H.I.E.L.D. Agent Phil Coulson assembles a small team of agents to investigate a mysterious group called the Rising Tide. In doing so, they encounter Mike Peterson (J. August Richards), a laid-off factory worker who has acquired superhuman powers.