Visual Novel / her tears were my light 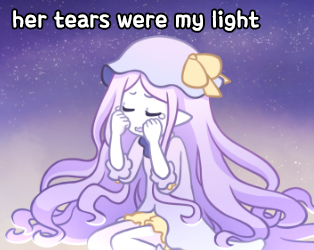 Her Tears Were My Light is a Yuri Genre Visual Novel that NomnomNami made for NaNoRenO 2016.

You play as Time and befriend Space, only to encounter a mysterious force, Nil, that attempts to separate her from you. You must use your ability to travel to different points in time (implemented through unconventional use of the Ren'Py game engine's mechanics) to try to save her.

The game is available for free and can be downloaded here

Her Tears Were My Light contains examples of: