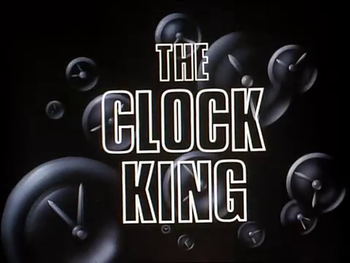 Seven years ago, then-councilman Hamilton Hill shared a subway seat with the humorless and bookish efficiency expert Temple Fugate, who literally lives every second of his life to a strict personal schedule. During their brief conversation, Fugate mentioned to Hill that there had been a large financial judgement placed against his company, with an important hearing on the matter scheduled later that day. If Fugate loses the appeal, he'll literally lose his company and his entire life's work. Hill, a lawyer himself, suggests that if Fugate takes a break from his usual routine and relax, maybe then he can make a more favorable impression on the judge. Fugate is aghast at the notion of deviating from his sacred routine, but considering the stakes, he accepts Hill's advice and takes his daily 3:00 coffee break at 3:15.
Advertisement:

This proves disastrous, as everything from innocently-playing children to stray dogs to the weather itself soon waylays him. When he finally makes it to court, the Judge chastises him for being late and rules that the judgement against Fugate's company will stand. Fugate nearly loses his mind at the news. With his life ruined, all because of the one and only time he was ever late for anything, Fugate plots his revenge against the man he holds responsible... Hamilton Hill.

Cut to present-day Gotham, where now-Mayor Hill is on his way to dedicate a new subway station as part of his reelection campaign. Suddenly, the downtown traffic lights go haywire; they've been sabotaged—and that's only the first part of the plan to make sure this is the worst, most humiliating day Mayor Hill has ever experienced. Whose plan? None other than Temple Fugate's. And if it all goes to schedule, by 3:15 this afternoon, Hill won't even be alive. Can Batman match wits with the greatest Schedule Fanatic the world has ever seen and unravel the clues before time runs out?