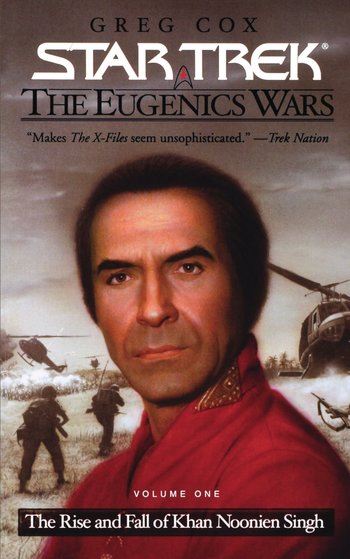 "To surpass nature, one must be crueler than nature."
—Dr. Sarina Kaur
Advertisement:

Star Trek: The Eugenics Wars is a trilogy written by Greg Cox about the life of Khan Noonien Singh. It covers the superman's rise to power, subsequent fall and his exile on Ceti Alpha V. Along with "Space Seed" and The Wrath of Khan, we are given Khan's life story, showing how he rose to power and became the monster that his is.

Sarina Kaur, a brilliant scientist from India, wants to make a superior breed of humanity. To do this, she gathers several other brilliant scientists from around the world and takes them to Chrysalis, an underground research facility in India where they can work without government interference. The missing scientists are noticed by Gary Seven, prompting an investigation into the worldwide disappearances. Unfortunately, Chrysalis has already produced several super children, including Khan. Drawing the line at murder, Gary and Roberta evacuate the facility and activate the self destruct mechanism, scattering the children around the world in the hopes that they will grow up and live normal lives. Unfortunately, superior ability breeds superior ambition.

The story makes extensive use of actual history, veiling the Eugenics Wars behind the brushfire conflicts of the 1990s. Author's notes for almost every chapter are in the back of the book, which help provide context for events that happened or are referenced and how they fit into the secret wars between superhumans.