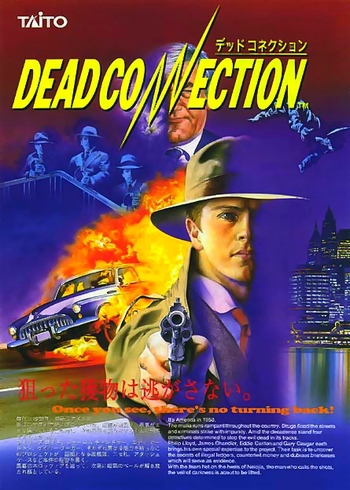 You can hear that Ennio Morricone score just by looking at the poster.

September 5th, 1953.
In a big city somewhere…
Men making a stand against a gigantic crime.

Set in 1953, in the crime-infested streets of the United States (the game doesn't specify any locations, though it appears to be Chicago from what the game shows), a powerful mob kingpin named Don Nerozzia have taken over the entire city. Uniting the mob with himself atop their operations, Nerozzia rules all the mob's activities and have the streets in his grasp. A group of vigilantes have taken a stand to battle the gang, launching raids and ambushes on the hideouts of Nerozzia's underlings.

You are one such member of the vigilante force, after the death of your girlfriend in a gangland drive-by, and it's you against every criminal in the big city, tracking down and eliminating Nerozzia's various cohorts in shootouts set in a restaurant, a mansion, an alley, and various locations as you attempt to uncover Nerozzia's location in order to take him down.

Yeah, this is more or less The Untouchables, re-imagined in video game form.

Do not confuse this with the 1994 film, Dead Connection.