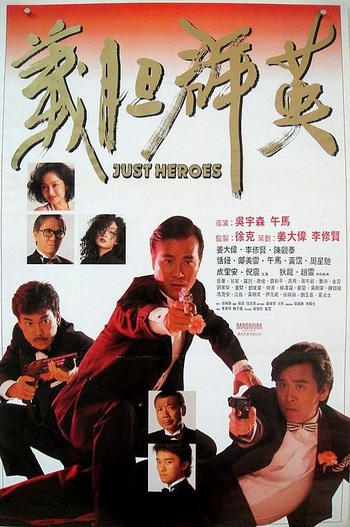 So... are you guys trying to shoot the audience, or each other?
Advertisement:

Just Heroes is a 1989 Heroic Bloodshed film directed by John Woo, starring Danny Lee (from The Killer), David Chiang and Chen Kuan-tai (veteran Shaw Brothers action stars) as Blood Brothers from a triad syndicate who ends up being double-crossed after a hostile takeover.

Wai (David Chiang) and Sou (Danny Lee) are among the adopted sons of a murdered triad leader. After their adopted father's demise, they have to be initiated into the ranks of the triads, which is difficult for them both, because Wai have decided to go straight after giving up life as a mobster, while Sou is dealing with personal issues with his pregnant wife Annie. But, when The Mole responsible for their father's death have plans to wipe out all remaining heirs to seize total control of the syndicate, both brothers have to put their differences aside for a bloody final showdown.

While not really as popular as Woo's other films (like A Better Tomorrow, The Killer or Hard Boiled) in the heroic bloodshed genre, Just Heroes remains an entertaining (although not as action-laden) entry in Woo's filmography, filled with shootouts, manly bonding, brotherhood, and most of the trademarks John Woo is known for.

.. except the doves, that is. The Killer comes out a few months after this film, before Woo's obsession with the doves started going on to full-swing.