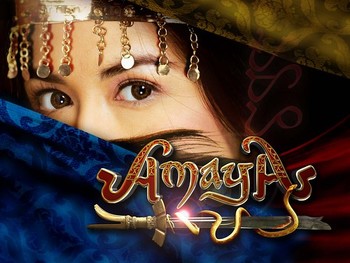 Amaya is a Filipino live-action TV series, created and aired by local studio GMA Network, with writer Suzette Doctolero as Showrunner. It premiered in early 2011, and put out 165 half-hour episodes, daily on weekdays (following a Telenovela or Soap Opera format), until mid-2012.

It is very notable for being one of the few recent examples of Filipino period dramas set during the late precolonial period of Philippine history: specifically, sometime in the early 16th century, shortly before the first recorded contact with Europeans: the 1521 arrival of Ferdinand Magellan and his Spanish expedition in the Visayas, the central part of the would-be Philippines, where in Real Life he would lose his life fighting against warriors led by Datu Lapu-lapu at the Battle of Mactan Island.

It stars the (ironically Spanish-mestiza in Real Life) actress Marian Rivera in the title role. Amaya is the sort-of princess born, out of wedlock, to Datu (Chief) Bugna, who commands a banwa (roughly, community) somewhere in the precolonial Visayas, and to Dal-ang, an uripon ("slave") under his command. Because Amaya is the offspring of a high-ranking datu and a lowly uripon, her social status averages out to freeing her by default; and because a tiny snake followed Amaya out of Dal-ang's womb, Amaya turns out to be The Chosen One for fulfilling the prophecy made by a babaylan (priestess) that one day a child would be born with a snake for a twin—a sign of favour from their deities and ancestors—and will grow up to be a feared warrior, and defeat the powerful Rajah Mangubat, to whom her father, Datu Bugna, swore fealty via blood compact.

And therein lies the problem. For all that the deities and spirits might declare their favour for Amaya, there are actual, physically present people who are not okay with this, including Rajah Mangubat himself, and Diyan Lamitan, Datu Bugna's paramount or "official" wife, who on top of the pressure of needing to give him a male heir, dislikes his lavishing favours on the lowly uripon, Dal-ang.