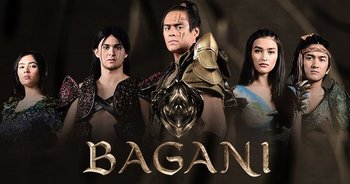 Any similarity to actual Philippine tribes is merely coincidental. Or so we claim.
Bagani is a Fantasy TV series from the Philippines that draws inspiration from the country's various myths. In the beginning, the world of Sansinukob was made from a twinkling light in the heavens blessed by Bathala. So blessed was it that Bathala's most powerful creatures, the brother deities Apo and Sarimaw, were tasked to guard it.
Advertisement:

Sansinukob is divided into five regions, each ruled by a clan:

Because of their differing lifestyles and principles, they are often at odds with each other, but they will learn that there are more harmful threats than their fellow men. Five heroes from each clan desiring peace, the Bagani (lit. Warrior), have arisen to fight the supernatural forces aiming to overthrow the mortals.
Advertisement: