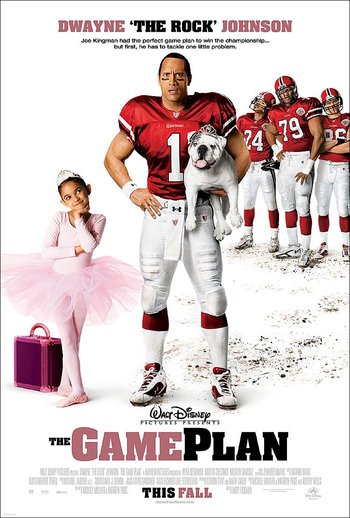 He had the perfect game plan. There's just one little problem...
Advertisement:

The Game Plan is a 2007 Disney family comedy film directed by Andy Fickman, with the screenplay by Nichole Millard and Kathryn Price, and the story by Millard, Price and Audrey Wells.

NFL quarterback Joe Kingman (Dwayne Johnson) is living the perfect bachelor lifestyle when he discovers that he has an 8-year-old daughter he's never known about named Peyton (Madison Pettis). Hilarity Ensues when she comes to stay with him as Joe struggles to be a parent while also juggling his sports career.

This film is an example of: