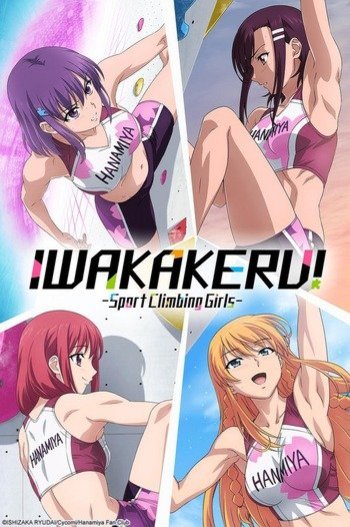 Sport climbing is a sport that makes use of both the body and the brain to climb walls. Kasahara Konomi, a master at puzzles, just happens to discover her school's climbing wall, and it looks almost like a colorful sort of puzzle in her eyes. This fateful encounter brings big changes to Konomi's life! With her teammates in the Hanamiya Girls' High School Climbing Club, Konomi races for the top in this passionate climbing story!

Iwakakeru!: Sport Climbing Girls (いわかける！- Sport Climbing Girls) is a sports manga by Ryuudai Ishizaka, which was originally serialized in Cycomi from 2017 to 2019; it was followed by a sequel, Iwa-Kakeru!! Try a new climbing, which ran from 2019 to 2021. The manga received an anime adaptation for the 2020 Fall season.