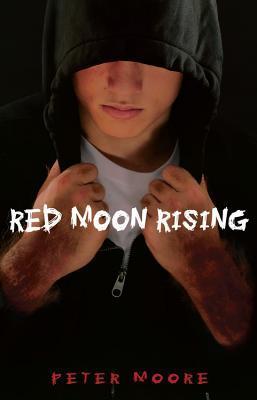 Just before humans split off from their hominid primate ancestors, two separate mutations occurred, resulting in three different species: H. sapiens, H. vampyros, and H. lupus. From a genetic viewpoint, humans, vampyres, and wulves are 99.6% identical. That four-sixths of one percent makes all the difference in the world.
— Dr. Kavita Singh, Critical Divergence: the Human, Vampyre, and Wulf Genomes
Advertisement:

Red Moon Rising is a young adult Urban Fantasy novel by Peter Moore first published in 2011. It takes place in a world were humans, vamps, and wulves evolved and lived alongside each other all through civilization.

Vampyres are The Beautiful Elite; platinum blonde, tall, attractive, and highly intelligent. In contrast, Werewulves work work menial jobs and live in bad neighbourhoods. The main character is Dante "Danny" Grey, who has been raised as a half-vampyre, living with his mother and going to Carpathia Night, a high school for vamps. However, his father was wulf, not human, and despite the genetic treatments he had as an infant, Danny is going through some... changes.

Fortunately, he can rely on his best friend Claire, and classmate/friend Juliet. But there's only a month until the next full moon, and Danny's time is running out.