Film / The Company of Wolves 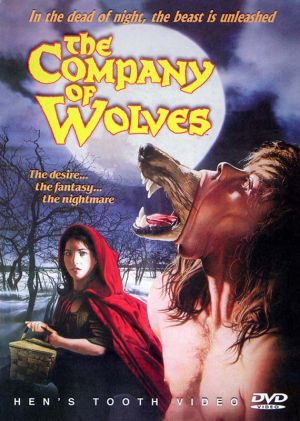 "Don't stray from the path."
Advertisement:

A 1984 horror/fantasy film directed by Neil Jordan and written by Angela Carter. Loosely based on a short-story of the same name from the anthology The Bloody Chamber.note The film also includes elements from two other stories in the collection, "The Werewolf" and "Wolf-Alice".

Rosaleen, a young girl ("I'm twelve and three-quarters old!"), falls asleep in her parents' mansion and dreams of living in a quaint medieval village. After her sister is killed in the forest by a pack of wolves, her grandmother comforts Rosaleen by telling her several stories of the dangers of deceptive wolves who roam the forest at night, looking for young girls to devour... She is informed to never trust a man whose eyebrows meet in the middle and that the most dangerous wolves are "The ones with fur on the inside".

Think of it as "Little Red Riding Hood", written by Sigmund Freud and directed by David Lynch.

The Company of Wolves provides examples of the following tropes: