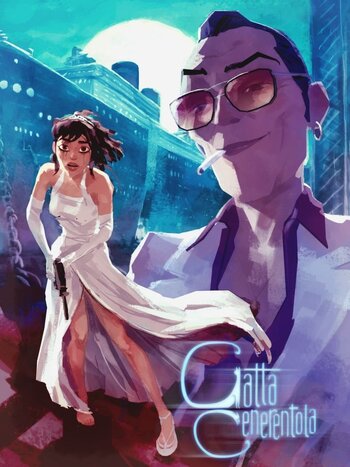 Cinderella the Cat (Gatta Cenerentola in Italian) is a 2017 Italian animated movie. It's a Darker and Edgier take on the classic Cinderella story, using a futuristic vision of the city of Naples as background.

Vittorio Basile is a tech mogul who builds a giant, high-tech ship called Megaride, which has a functionality where it stores the memories of everyone who steps inside and displays them as holograms. Vittorio has ambitions to turn Naples' harbor into a technological center and improve the quality of life in the city. However, Salvatore Lo Giusto, a mafioso, conspires with Angelica, the woman Vittorio is engaged to, to kill Vittorio at their wedding ceremony and take over Megaride for Salvatore's own operations.

Upon Vittorio's death, Megaride is inherited by his 3-year-old daughter, Mia Basile, who is put under Angelica's care until she comes of age and can sign a contract that cedes the ship to Salvatore. 15 years pass, with Mia growing up mute from the trauma of her father's murder and living in squalor, with only the ship's holograms for comfort. However, Primo Gemito, a former employee of Vittorio, has been trying to frame Salvatore all these years. Things come to a head when Mia and Primo meet on the eve of her 18th birthday.