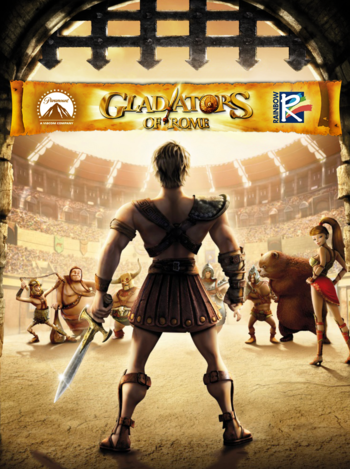 Gladiators of Rome is an Italian All-CGI Cartoon movie made by Rainbow SpA, an animation studio jointly owned by Iginio Straffi and Viacom. It was Rainbow's first original film, and Viacom released it through their subsidiary Paramount Pictures. The movie is a comedy about a lazy and thick-headed Roman named Timo who decides to turn his life around and become a gladiator. It premiered in Italy on October 18, 2012.

To write the script, Iginio Straffi enlisted the help of Michael J. Wilson (the American creator of the Ice Age franchise). It took over five years for the film to be completed, since it used up a lot of the Rainbow studio's resources. By the end of development, Straffi was so confident in the film that he floated the idea of a Gladiators TV Spinoff in this interview.

The movie is notorious among Rainbow fans for bombing at the box office: it only made back $10 million (€9 million in euros) worldwide...against an investment of $80 million (€70 million in euros). The financial loss spilled over into everything else that Rainbow was working on at the time. Most notable was the seventh season of Winx Club, which was hit with budget cuts halfway through production. note Two expensive elements of the previous 2 seasons (3D computer-generated segments and the Hollywood voice cast) were dropped from the 7th season entirely. It's safe to say that the Gladiators spin-off won't be happening anytime soon.

Gladiators of Rome provides examples of the following tropes: