Film / Crisis: Behind a Presidential Commitment 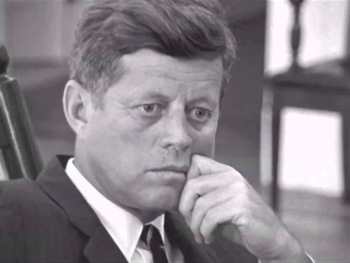 Crisis: Behind a Presidential Commitment is a 1963 documentary by Robert Drew.

", regarding the judicially-mandated racial integration of the University of Alabama, the opposition to the same from Governor George Wallace, and the subsequent intervention by President John F. Kennedy.

The first two black students at the university, Vivian Malone and James Hood, were arriving in June 1963. A similar moment when James Meredith integrated the University of Mississippi in 1962 had led to a white racist riot

which ended in two deaths and much destruction of property. President Kennedy and his brother, Attorney General Robert Kennedy, seek to find a way to get Malone and Hood enrolled in accordance with the judge's order, while allowing Wallace to save face and avoiding violence.

Drew's cameras were granted unlimited access to the Kennedy brothers, as well as George Wallace, as events unfolded. Crisis was first shown on ABC television in October 1963, four months after it was filmed and only a month before John F. Kennedy was assassinated. The film was added to the National Film Registry in 2011.

Compare Primary, a Drew documentary about the 1960 Wisconsin primary in which Drew had similar fly-on-the-wall access to Kennedy as well as Kennedy's opponent Hubert Humphrey.