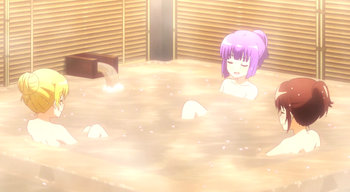 With bent up kneecaps in case it wasn't clear.
Advertisement:

The level of titillation from this trope can depend on many factors, including the scene context, the mood, the actor(s), and the presence of others of the same or opposite gender. Some viewers might consider such scenes fanservice regardless.

This trope can be easily subverted by a later camera shot that reveals a modesty towel, or for that matter a tube top, a strapless bikini, etc.

Subtrope of Sexy Discretion Shot. Compare to, and sometimes see it combined with, Toplessness from the Back and Godiva Hair, especially to "prove" that the character is actually at least partly unclothed.

The trope codifier is the opening sequence to Petticoat Junction, where the three women are visible from the shoulders up while skinny dipping in the water tank.