Film / The Legend of Lizzie Borden 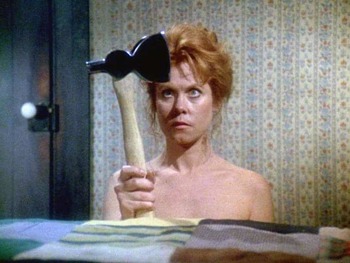 Samantha has had it with Endora this time.
Advertisement:

The Legend of Lizzie Borden is a 1975 TV movie directed by Paul Wendkos. If there's a definitive screen version of the Lizzie Borden story, it's probably this Made-for-TV Movie from The '70s. It's certainly the one that subsequent versions are copying.

The peace of quiet Fall River, Massachusetts, is ruined on August 4, 1892, when a panicked maid runs out of the home of wealthy Andrew Borden. A doctor arrives and finds Andrew dead, having been gruesomely murdered with a hatchet. People at the scene are still reeling from the shock of this when Andrew's wife Abby is discovered upstairs, also dead, also killed with a hatchet.

Suspicion soon focuses on Andrew's daughter and Abby's stepdaughter Lizzie (Elizabeth Montgomery, in a big Playing Against Type role just a few years after the end of her wholesome sitcom Bewitched). Lizzie was one of only two other people in the house at the time, the other being Bridget the maid. Lizzie is oddly calm and undisturbed, and details of her story don't match up. Soon, she is on trial for murder. But could a prim, well-bred upper-class lady really have taken a hatchet and chopped two people to death?

The Legend of Lizzie Borden originally aired on ABC on February 10, 1975. Fionnula Flanagan plays Bridget, the Bordens' Irish maid. Katherine Helmond plays Lizzie's older sister Emma, who has an ironclad alibi, being out of town. Gloria Stuart of future Titanic fame has a small role as a customer in a shop.